Nexia, a subsidiary of Ingersoll Rand, is a smart home automation application that's used by every Trane, Ameristar and American Standard HVAC owner to moderate and control their home temperature via Z-Wave Technology. With Ingersoll Rand's recent efforts to push their 2030 goal of removing 1 gigaton of carbon from the Earth's atmosphere, Trane has been taking initiatives to make all their HVAC models Energy Star certified by the end of the fiscal year. With hopes to prioritize energy efficiency within HVAC users, Trane recently acquired a machine-learning algorithm that uses collected data from a home's wifi thermostat and predicts the most efficient comfort range for the user– this new feature will be implemented within the Nexia app.

Prompted to evoke empathy for sustainability and pro-environmental behaviors within Nexia's affluent user base, with a time frame of 3 months, Kenzie Barden and I were tasked with designing towards the project's goals of getting the homeowners to turn on the new energy savings feature and to continually use the feature.

For a deeper look at our team's project timeline, click here.

for the next 3 months, our team did a week long session of in-depth research into the energy saving market space as well as the behavioral science and psychology behind pro-environmental behaviors.

With the mass amount of research that Kenzie and I were able to gather, we've validated the market need and opportunity for Ingersoll Rand to grow within the energy savings niche. Alongside the market research, we were able to identify why some individuals are more sustainable than others, and how those behaviors can be shifted to more eco-friendly habits.

Our annotated bibliography and note citations on the research, can be found here.

As stated by the Rocky Mountain Institute, 20% of carbon admissions come from residential homes, while HVAC (heating, venting, air conditioning) units account for a whomping 54% of household's energy consumption. With 2/3 of the home energy consumers underwhelmed with their current home energy efficiency, even if the consumers wanted to reduce their HVAC energy consumption, there are little or ineffective options currently in the market place to satisfy those needs.

When Nexia enters that market with their new energy savings feature, the potential to succeed is immensely higher because the market is still not oversaturated with products promoting eco saving features within their home automation systems. This allows for a larger consumer segment to cater to, with a lucrative potential of a $144 billion revenue growth– as provided by the Rocky Mountain Institute.

Coming into the project, Trane had already invested into completing demographic research for residential HVAC owners, the external research company established that the most prominent personas are: the indulgent home aficionado, discriminating reliability seeker, and the emerging upgrader.

Within the research, our team was able to successfully establish three main factors that drives a person's desire to be sustainable: "cost-savings", "environmental-conscious" and "waste-hate"; we've analyzed these driving behaviors and turned them into personas that are specifically catered towards their emotional triggers. All three of these trigger personas have been conditioned since childhood to behave a certain way in regards to the environment due to their parents' relationship with nature and whether or not they've had meaningful experiences in nature as children. The "waste-hate" individual has been identified as the most strongly tied to the environment, and thus more resilient into the efforts of sustainability; while the "cost-savings" person is the most changeable and will often revert back to their unsustainable behaviors unless pushed by a reward system or through social norms.

Immersion was also established to be the best way to promote conscious changes to one's behavior. The aspect of re-immersing will be a large contender to user success as our team begins to piece together methods to support more fast thinking processes when it comes to sustainable efforts– thus making the action of recycling or being more efficient with their HVAC, easier and like second nature.

Within a week of sending out a user survey questionnaire to current Nexia users, we were able to synthesize an amazing response size of +4000 completed surveys. Based on the survey results: users want the energy saving feature; when asked if they would turn on an energy savings feature if given the opportunity, a large 86% answered either "extremely likely" or "likely".

The surveys were telling, in that the large proponent of the users do reflect and validate our research; while also predominately inhabiting the already established emotional triggers. The massive user correlation to the emotional trigger personas will largely drive how we immerse our users within energy savings.

Through the entire design process, our team wanted to closely collaborate with our developers, engineers and stakeholders as much as possible. We would routinely host design workshops to continuously allow input from different disciplines and run weekly design playbacks on our design progress.

To get a better understanding how our users interact with their HVAC and energy usage throughout the day, our team evaluated what types of activities and habits matter the most to each of our personas. 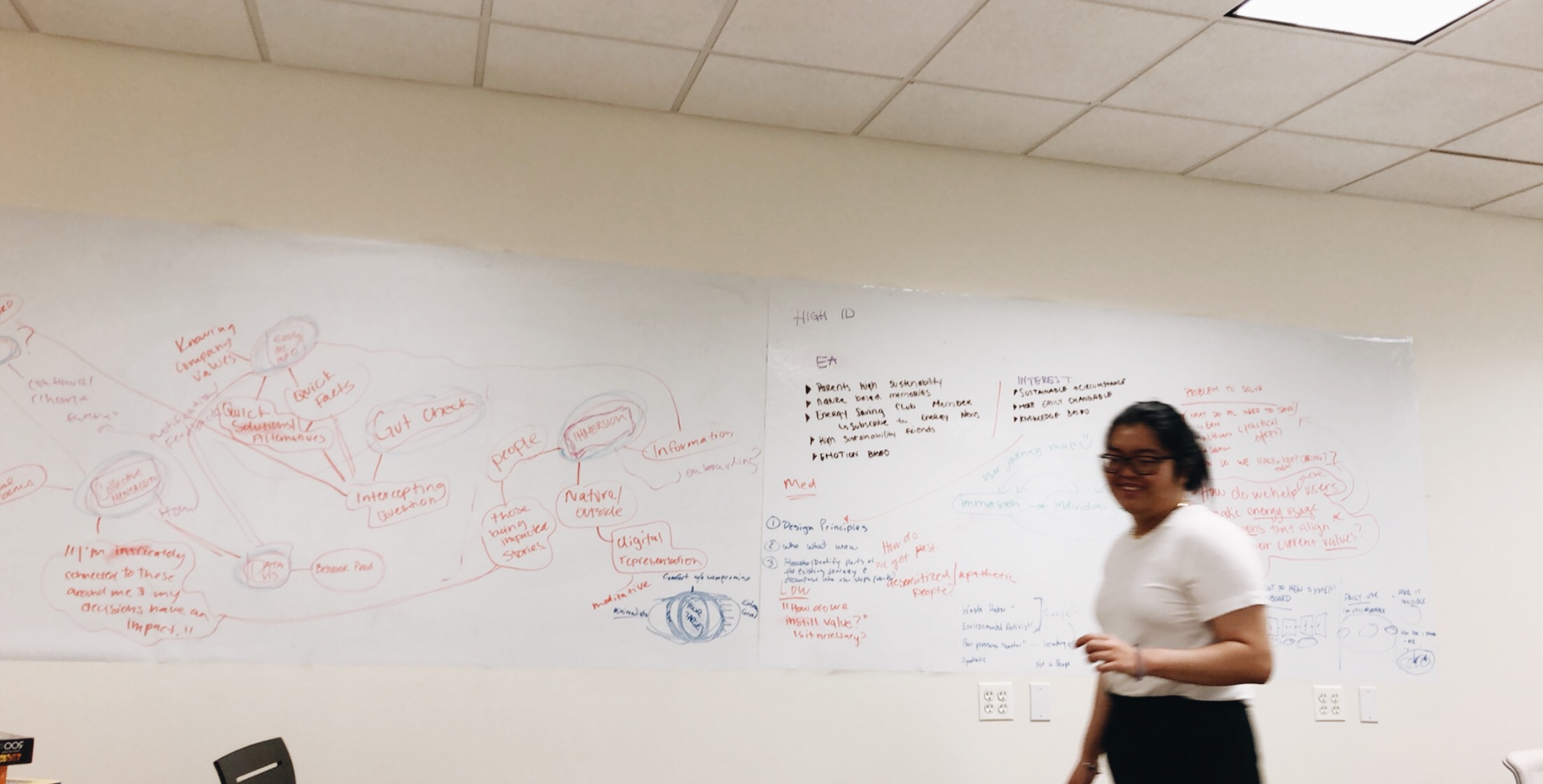 {"items":["9cdc3e_cf6444745dcd441d866b82833e72bd30~mv2_d_3072_2304_s_2.jpg","9cdc3e_f890af5558274f4cacc6bf54ec7bd674~mv2.jpg"],"styles":{"galleryType":"Strips","groupSize":1,"showArrows":true,"cubeImages":true,"cubeType":"fill","cubeRatio":"100%/100%","isVertical":false,"gallerySize":300,"collageDensity":0.8,"groupTypes":"1","oneRow":true,"imageMargin":0,"galleryMargin":0,"floatingImages":0,"chooseBestGroup":true,"smartCrop":false,"hasThumbnails":true,"enableScroll":true,"isGrid":false,"isSlider":false,"isColumns":false,"isSlideshow":false,"cropOnlyFill":false,"fixedColumns":0,"enableInfiniteScroll":true,"isRTL":false,"minItemSize":120,"rotatingGroupTypes":"","rotatingCubeRatio":"","gallerySliderImageRatio":1.7777777777777777,"numberOfImagesPerRow":3,"numberOfImagesPerCol":1,"groupsPerStrip":0,"borderRadius":0,"boxShadow":0,"gridStyle":1,"mobilePanorama":false,"placeGroupsLtr":false,"viewMode":"preview","thumbnailSpacings":0,"galleryThumbnailsAlignment":"bottom","isMasonry":false,"isAutoSlideshow":false,"slideshowLoop":false,"autoSlideshowInterval":4,"useCustomButton":false,"bottomInfoHeight":0,"titlePlacement":"SHOW_ON_HOVER","galleryHorizontalAlign":"center","galleryTextAlign":"center","galleryVerticalAlign":"center","scrollSnap":true,"itemClick":"link","fullscreen":false,"allowSocial":false,"allowDownload":false,"allowTitle":true,"allowDescription":false,"loveButton":false,"loveCounter":false,"videoPlay":"onClick","scrollAnimation":"NO_EFFECT","scrollDirection":1,"overlayAnimation":"NO_EFFECT","arrowsPosition":0,"arrowsSize":23,"watermarkOpacity":40,"watermarkSize":40,"useWatermark":true,"watermarkDock":{"top":"auto","left":"auto","right":0,"bottom":0,"transform":"translate3d(0,0,0)"},"loadMoreAmount":"all","defaultShowInfoExpand":1,"allowTitleExpand":true,"allowDescriptionExpand":true,"allowLinkExpand":true,"expandInfoPosition":0,"allowFullscreenExpand":true,"fullscreenLoop":false,"galleryAlignExpand":"left","addToCartBorderWidth":1,"addToCartButtonText":"","slideshowInfoSize":200,"playButtonForAutoSlideShow":false,"allowSlideshowCounter":false,"hoveringBehaviour":"APPEARS","thumbnailSize":120,"magicLayoutSeed":1,"imageHoverAnimation":"NO_EFFECT","calculateTextBoxHeightMode":"AUTOMATIC","calculateTextBoxWidthMode":"PERCENT","textBoxHeight":0,"textBoxWidth":200,"textBoxWidthPercent":50,"textImageSpace":10,"textBoxBorderRadius":0,"textBoxBorderWidth":0,"textsVerticalPadding":0,"textsHorizontalPadding":0,"titleDescriptionSpace":6,"customButtonText":"","customButtonBorderWidth":1,"customButtonBorderRadius":0,"loadMoreButtonText":"","loadMoreButtonBorderWidth":1,"loadMoreButtonBorderRadius":0,"imageInfoType":"NO_BACKGROUND","itemBorderWidth":0,"itemBorderRadius":0,"itemEnableShadow":false,"itemShadowBlur":20,"itemShadowDirection":135,"itemShadowSize":10,"imageLoadingMode":"BLUR","expandAnimation":"NO_EFFECT","imageQuality":90,"usmToggle":false,"usm_a":0,"usm_r":0,"usm_t":0,"videoSound":false,"videoSpeed":"1","videoLoop":true,"galleryLayout":3,"gallerySizeType":"px","gallerySizePx":300,"allowHover":true,"mobileSwipeAnimation":"NO_EFFECT","gotStyleParams":true,"showVideoPlayButton":true,"selectedLayout":"3|bottom|1|fill|false|1|true","layoutsVersion":2,"selectedLayoutV2":3,"isSlideshowFont":false,"externalInfoHeight":0,"externalInfoWidth":0},"container":{"galleryWidth":2560,"galleryHeight":1320,"scrollBase":0,"height":null,"width":null}}
A simple flow detailing how our iterations could fit into the current Nexia App structure.

The various themes of our concept designs are based on the idea of "immersion", and what would be the best way to get users completely immersed to their energy savings efforts– and thus, sustainability. Our themes largely comprised of social norms, visual and narrative storytelling and personalization of statistical data representations.

Through several implementations of Design Thinking strategies (mind mapping, storyboarding, etc): we've concluded that focusing on establishing energy savings behaviors in current users is going to be more feasible due to the urgency of the project release date. Focusing in on Trane's already established market demographic provides our team enough scope and time to cater to their specific needs.

To fully understand the feasibility of developing our proposed low fidelities, the design team hosted a card sorting exercise with the developers and engineers. Collaborating with a cross functional team allowed us to better understand what was possible within the time frame and to further unify the our vision of what the final product could look like.

Results: Slider Interaction was most relevant to testers (5/9)

Results: Words that resonated with users

We were finding that users were still having difficulties recognizing what the energy savings actually did. So to better understand what type of words would hold the most salience for our users, the design team hosted various session to test using the Cloze Method: a fill in the blank format of our low fidelity screens. By having the users fill in the blanks with what resonated to them the most, we were able to pinpoint how to better structure our UX writing. 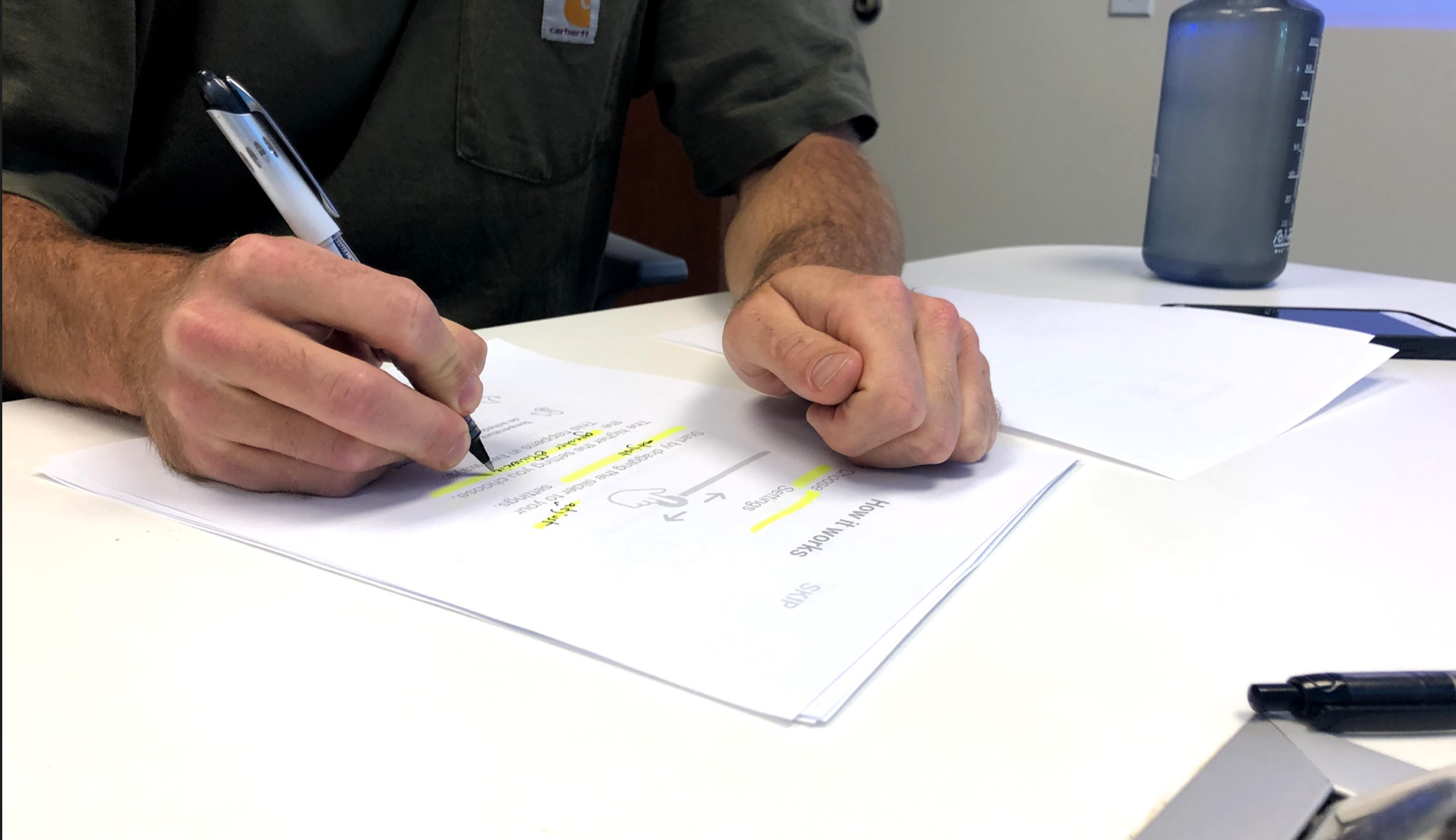 Results: Understanding of what words resonated with users

For user testing sessions round 4 & 5, we tested our high fidelity screens and finalized mockups. Because of the high sensitivity of these finalized screens, I'm not able to show them for this case study.

Written development storyboards that the dev and design team collaborated upon.

Between user testing for round 4 & 5, the design team and development team took time to sit together and really establish the framework of the potential MVP release. Doing so, allowed us to finalize the plan and actualize the onboarding screens onto the developers backlog; this also proved that our design team was on track to match the agile process of our developers' biweekly project schedules.

At the time of our internship, Ingersoll Rand is very engineering based and have very little structure for UX making this internship the most intensive 3 months I've ever experienced as a UX Designer. After just 3 weeks of starting my internship, our UX Director transitioned out of their position to take on another job. With no oversight, my fellow intern, Kenzie, and I had no one within Nexia to advocate for standard UX practices; and we often found ourselves in the difficult position of defending the need for research and usability testing when it didn't coincide with either the project manager's desire for an instant release nor the feature oriented agile developers– to which we've had to research the best methods on implementing an agile UX practice. Kenzie and I were thrown into a sink or swim situation where we were the driving force to leading our own project, research and internal company communications.

Despite the hurtles that presented itself during this internship, I've never been more exhilarated and more fulfilled in my UX career. We were trying to promote social changes while constantly pushing ourselves to remain user-centered and create innovative UX strategies to handle a difficult problem like: climate change. I've grown immensely as a designer and have learned how to communicate complex ideas and processes to a wide variety of individuals with differing backgrounds whom might not understand the creative process of design. Research and data backed designs were our bread and butter into presenting our ideas and validating the designs, because of this, the process of research is now immensely ingrained in my design process and, dare I say, became enjoyable.